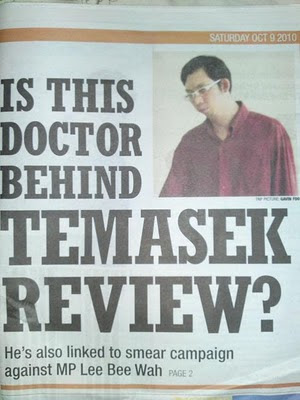 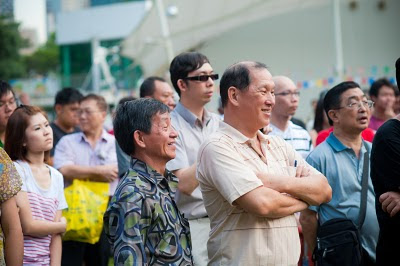 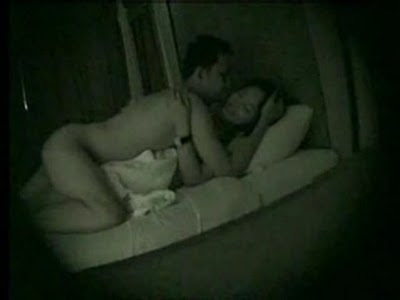 Politics in Singapore just got a little more interesting! Recently, Dr. Joseph Ong Chor Teck was exposed by The New Paper as the founder of and the man behind a local political website by the name of Temasek Review (TR) and the now defunct Wayang Party blog. The New Paper playfully called him"Doctor who?" because his identity was a mystery for so long. Shockingly, the man behind the controversial websites was discovered to be a medical doctor to the surprise of everyone. His political websites became notorious because of their shape criticism of the Singaporean Government, it's allegations against many people and political groups, threats to sue opponents in Singapore and other hard tactics. Temasek Review is one of the most popular socio-political websites in Singapore is access by at least 20,000 readers daily. And now there is a sex video circulating on the Internet allegedly of Dr. Joseph Ong Chor Teck with a prostitute.

Dr. Joseph Ong's websites have made him a long list of enemies in a very short period of time. Unbranded Bread n Butter compiled a short-list of people and groups that were attacked by websites now linked to the doctor:

1) Workers’ Party – the Wayang Party Blog owes its origins to mysterious “wayang party” fliers outside the WP 50th anniversary dinner. The press did an email interview with the site, only for the owner to deny involvement. Perhaps the Malay boys he had paid to put up the fliers will now have a name to go with his face.

2) SPH – TR has accused SPH and its blogger Geoffrey Pereira for grabbing contents of his site and initiating a DOS attack on it.

And since his name was made public as the man behind Temasek Review, the investment company Temasek Holdings has delivered a letter to Dr. Joseph Ong Chor Teck, asking him to drop the name "Temasek Review" from his website. The investment house's annual performance review has been called Temasek Review since 2004 and electronic versions are posted on it's website. This year's edition is called Temasek Report 2010 but Temasek Holdings said that the socio-political news site's that changed it's name from 'The Wayang Party' to 'The Temasek Review' in 2009 appeared to have been done so 'capitalizing on the goodwill and reputation' of the name. Temasek Holdings has challenged Dr. Ong to 'live up' to the website's claims of valuing 'transparency, accountability and responsibility' and 'do the responsible thing to change the name of the website'. Legal action might be taken against Dr Joseph Ong on this matter.

But Dr. Ong has other things to think about now other than angry letters and lawsuits. People have been trying to dig up everything on him since the reports revealing the true identity of the anonymous writer of TR as Dr Joseph Ong. You would think a man with so many enemies would be more careful and avoid being in the situation to get recorded on a hidden spy cam. Or is this video a self-taped sex video he made himself because no one knew who he was before The New Paper ran the revealing story? One thing is for sure, we will never know who is really behind this leaked sex video. The funny thing is a TR 'writer' once claimed possession of sex tape between Foyce Le Xuan and Jack Neo. But the only sex tape in the possession of TR must be of it's founder. The hidden cam sex tape of Dr. Joseph Ong first came to the attention of GutterUncensored.com last week when we received an email from a confidential source. Here is a potion of that email:

I have a sex scandal tape from Singapore that I thought you might find titillatingly worthy of a site like yours. I trust you will keep my email confidential.:)

The mysterious owner of this famous Singapore blog then changed this site to Temasek Review (temasekreview.com) I think sometime in 2009. What is interesting about this guy is that he went by many names and harassed many people ranging from opposition political parties, politicians, rival social political blogs and community leaders.

Now the fun part. Last weekend, a local tabloid paper ran a front page story to expose the identity of the owner of the site, a local practicing doctor by the name Joseph Ong Chor Teck. He was caught distributing posters calling for the resignation of a poltician. With this revelation, the local internet community has gone wild trying to surface more information on this doctor.

So far what is known is that he has graduated from prestigious schools (Raffles Juinor College and National University) and practices at a private clinic (Healthway Medical Clinic). Pictures of him are also appearing showing him at events that Temasek Review had covered. Needless to say, his style of concocting local scandals and spreading of lies is catching up with him in a big way. Some examples I can think of now is him spreading rumours of a opposition politician’s mistress, claims of having his site DOSed by a local press firm, and countless exclusive exposes involving various prominent persons.

You can also see http://josephongchorteck.wordpress.com.

I didn’t believe it at first but careful inspection of images of him only validate my finding. I have compiled a fancy collage of his pictures against stills of the video and you can see for yourself......

I will see if I can dig out more videos of his. I think I’ve seen his naked butt more than once. :)

It has been a while since we had a good scandal from Singapore…… have fun!

Okay, sounds interesting. But how you may ask how was the journalists able to obtain his identity. Well, according to his own Temasek Review site:

A formal complaint has been lodged with Mr Benny Lim, Permanent Secretary, Ministry of Home Affairs against the Singapore Police Force for allegedly leaking confidential information obtained during a police investigation, to a journalist from The New paper.

In his email addressed to the Permanently Secretary, Ong wrote that he was approached by a journalist from The New Paper in his office today who wanted to interview him on his one year-old case, which he refused.

Obviously perturbed by his refusal, the journalist, Ng Wan Cheng (Hp no: 9823 0493) claims that even without his input, she will still continue to write her story and publish it anyway because she had done all the necessary fact finding on his case and merely wanted to hear his side of the story.

To prove her point, she went on to reveal details which Ong had ONLY provided to the Investigating Officer who took his statement last year.

A shocked Mr Joseph Ong then called the Investigating Officer and Head Investigation of Ang Mo Kio Police Division who replied and confirm that “information provided to the police during an investigation is strictly confidential and may not be communicated to outside parties not privy to the investigation.” This was concurred by a lawyer friend he subsequently contacted.

When contacted by Temasek Review in a follow-up email interview, Mr Joseph Ong remarked that: “I am perturbed that such supposedly confidential information was leaked to the press which will surely erode public confidence in the Singapore Police Force. “

When asked if he will consider legal action against the parties responsible, he said: “I will need to consult my lawyer further before deciding on the course of action (to take) but I will not rule that out.”

Yeah, he actually post publicly the reporter's phone number in on his website. LOL... And basically indirectly confirm the story in The New Paper by saying the "police leaked confidential information." The New Paper report "Dr Ong of Healthway Medical Clinic had informed police that he founded the TR site." So yeah, TR confirm the story form The New Paper by posting the above article. So I cannot wait for the article on Temasek Review about Dr Joseph Ong's spy cam sex tape. Doubtfully the "minor offence case" the Police Division were investigating had to do with the sex video or of him frequenting prostitutes because prostitution is legal in Singapore. And to be honest, fucking prostitutes is like the national pastime of the awesome city-state that is Singapore.

Previously known as The Wayang Party, the website is reported to have changed its name to "Temasek Review" in 2009.

But investment firm Temasek Holdings said it had also been using "Temasek Review" for its annual performance review reports since 2004.

This was according to Temasek Holding's senior managing director and head of Strategic Relation Goh Yong Siang.

In a letter addressed to a Dr Joseph Ong Chor Teck, who is believed to be the website's founder, Temasek Holdings said it had no qualms about the website's mission.

But it added it appeared the website had been capitalising on the goodwill and reputation of investment firm Temasek Holding's name.

A lawyer who spoke to Channel NewsAsia said a lot would depend on if and when both parties acquired trade mark rights in the name "Temasek Review".

The lawyer, who requested anonymity, said: "Although Temasek Holdings (TH) used the name 'Temasek Review' for its annual performance reports since 2004, it did not register this name as a trade mark until November 9, 2009.

The lawyer added: "If Wayang Party changed its name before November 9, 2009, TH would have to proceed on a claim for passing off.

"In other words, TH has to prove to the court that it has a reputation in the name 'Temasek Review'; that (website) Temasek Review has misrepresented to the public that its on-line publication originated from or is associated with TH; and as a result of the misrepresentation, TH has suffered damages".

In relation to registering a company with the name "Temasek" in it, Accounting and Corporate Regulatory Authority Singapore (ACRA), in its website, advised that the following is not allowed: 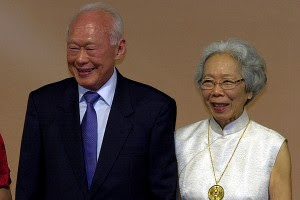 Madam Kwa Geok Choo, wife of Minister Mentor Lee Kuan Yew and mother of Prime Minister Lee Hsien Loong, passed away in her home at 5:40pm on Saturday. She was 89 years old.

The Prime Minister’s office has released a statement saying that the wake for Mrs Lee Kuan Yew will be held at Sri Temasek, official residence of the Prime Minister at the Istana grounds, on Monday and Tuesday (October 4 – 5).

Those who wish to pay their last respects will be able to do so from 10am to 5pm on those two days.

A private funeral will take place on Wednesday October 6 at Mandai Crematorium.

The family has requested that no obituaries, flowers or wreaths be sent. All donations made will go to the National Neuroscience Institute (NNI) Health Research Endowment Fund.
No comments: