We (PAP) are DEAF to all criticisms - Lim Swee Say

Union Chief Lim Swee Say: We are like a little deaf frog, deaf to all criticisms.
I love Lim Swee Say. He says the darnedest things. Like this fable he told in Parliament:

THE story goes that in a kingdom of frogs, the tallest tower in the world is built for an annual competition.
And when the event is held, many aim to become the champion by making it to the top, but fail as they are discouraged by the audience, who warn that the climb is too dangerous.

All except one frog who did reach the top. And when asked afterwards why he ignored the crowd, the frog said: 'I'm deaf. I can't hear them.'

With this tale, labour chief Lim Swee Say responded to opposition MP Low Thia Khiang (Hougang), who repeated his criticism of a day earlier that low- wage workers continue to languish, and that the labour movement ought to do better and work harder.

Mr Lim's point: Despite criticisms like those levelled by the Workers' Party chief, the labour movement continues to address problems faced by low-wage workers and to improve their situation.

From: yansimon52
Subject: Re: Geniune feelings of Singaporeans suppressed
On Apr 8, 1:05 pm, "truth" wrote:
> truth comment: i hope more and more singaporeans will adopt this
> way to spread about the evils of the papist leegime to those who
> are not internet savy. in this way patriotic singaporeans will be able
> to beat the propaganda of the msm. how many policemen do they
> have to investigate every case. if there are hundred of thousands
> everyday, there is nothing the authority can do.

> In yet another sign that public anger against the PAP is fast reaching an
> all-time high, fliers critical of the PAP were found in the mailboxes of HDB
> flats in Pasir Ris-Punggol and Marine Parade GRCs.

> Printed on A-4 sized papers in both English and Chinese with the title "The
> truth that every citizen must know", the fliers made "allegations about
> corruption and exploitation and complained about cost of living, among other
> things" and urge residents to take "collective and concerted action to go
> against the PAP", the Straits Times reports today. 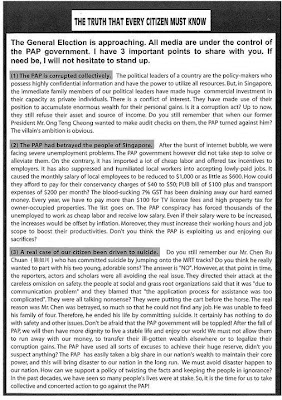 Click to enlarge
> As expected, the state media dared not publish the content of the filers and
> jumped to the defence of the embattled PAP by casting aspersions on the
> credibility of the fliers.

> TODAY published an article with the misleading headline "Poison pen letters
> hit Sengkang" while the Straits Times interviewed one resident who felt it
> was not "appropriate" for such content to be circulated this way to give the
> erroneous impression to the public that the distribution of anti-PAP fliers
> is wrong.

> A police report was made and the Singapore Police is now investigating the
> matter involving a political party under the Sedition Act, where the
> offender could be fined up to $5,000 and/or given a maximum jail term of
> three years.

> It is most befuddling that the state media chose to slant its articles in
> such a way to mislead readers into thinking that a criminal offence has been
> committed when the content of the fliers remain a mystery.

> At the very least, they should publish the content in full for readers to
> judge for themselves if they are indeed "seditious".

> It is hardly a surprise that the PAP MPs in the two GRCs have dismissed the
> fliers.

> PAP MP Charles Chong who sparked an outcry two years ago by describing
> Singaporeans as "lesser mortals" said the allegations against the PAP were
> too "broad and wild" to warrant a response.

> "It looks like someone wants to have a head start this time.We will respond
> if they are more specific and credible.The public could draw its own
> conclusions about the allegations," he was quoted as saying in the Straits
> Times.

> If this is indeed so, why then is the media hiding the content of the fliers
> from Singaporeans?

> Every Singapore citizen has the right to criticize the government and its
> policies and to call on collective action by the citizenry. The Singapore
> police should not waste precious taxpayers' monies on such frivolous police
> reports to criminalize legitimate civil activism as guaranteed under our
> Constitution.

> Readers who have received a copy of this flyer, please scan it and email to
> us at temasekrev...@gmail.com

> We would like to call on all Singaporeans to stand behind this brave
> Singaporean who dares to go against the despotic, undemocratic and paranoid
> regime. In the event that he/she is arrested by the PAP's police, we will
> set up a fund to fight the case for him/her in court. Let the whole world
> knows how dictatorial, repressive and totalitarian the PAP is!

22. Li HonYi (elder son of LHL/Ho Ching)
Li was apparently being groomed for a future leadership role after
being awarded a government scholarship to study economics at the
Massachusetts Institute of Technology (in 2008). The Singapore
military has served as a training ground for political leaders and
executives in state companies.

23. Teo Eng Siang (son of Teo Chee Hean)
Singapore pays S$280,825 for tuition for Teo’s son –
Teo Eng Siang was awarded a Public Service Commission Scholarship in a
public ceremony by his own daddy, Singapore Admiral and Minister Teo
Chee Hean. Young Teo now(2008) heads for the United States where he
will be attending Brown University in Providence, Rhode Island. Brown
University is a fashionable Ivy Leage school and has a huge annual
tuition of US$42,303, or US$169,202 (S$280,825) for the full four
years. Don’t you think there are needier students in Singapore?

24. Warren Mah
Warren Mah, son of Mah Bow Tan, Singapore’s Minister for National
Development, is living in Philadelphia, Pennsylvania.
He is on a scholarship to the University of Pennsylvania from the
Monetary Authority of Singapore.
1 comment: