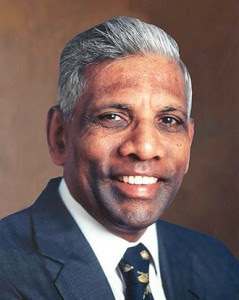 After getting his free ticket into PAP ministerialship, LHL was appointed
a second Minister of Finance (understudy to Richard Hu, the Minister in
charge of the ministry). Richard Hu's office was on the 43th floor (if I
remembered it correctly) of the Treasure Building off Shenton Way and LHL
had his office a few floors below.

During that period, the "inner" cabinet used to have pre-meetings before
the actual cabinet meetings where LKY would be present. It was at one of
these pre-meetings that the slapping incident occurred. LHL had earlier gone
to Richard Hu's office to request for a certain file, and when told by RH's
secretary that her boss was not around, LHL demanded the file and took it
with him without first obtaining verbal clearance from RH.

Later that afternoon when they were at the pre-meeting, RH chided LHL for
his behaviour, that he was not showing respect to senior members of the
cabinet. Present in the meeting was RH, LHL, Dhanabalan, Dr Tony Tan, Yeo
Ning Hong, and Deputy PM Goh Chok Tong. LHL brushed off RH's criticism, to
which Dr Tony Tan was the first to come to RH's assistance, telling LHL to
be more courteous in his behaviour. Dhanabalan then joined in the fracas and
agreed with TT. It was at this point LHL lost his cool and told Dhana off
with some racist remarks (about him being Indian marrying a Chinese or
something to that effect). With sentiments riding high, Dhana countered by
saying that LHL's own sister also married an Indian, to which LHL reached
across the table and slapped Dhana shouting "Leave my family affairs out of
this".

Dhana, TT and Yeo Ning Hong, then walked out of the meeting. It was at
this point that GCT, hitherto a quiet spectator in the heated dispute, stood
up and told LHL to stand down and that he would refer the incident to his
father. The 3 ministers were then recalled into the meeting. TT and Yeo Ning
Hing returned, but Dhana did not.

After GCT had reported the matter to LKY, the old man then forced his son
to apologise not only to Dhana but the other senior ministers as well. All 3
mentioned ministers who left the meeting tendered their resignation to LKY
(RH ate humble pie, continuing as if nothing happened). The old man
persuaded all the 3 disenchanted ministers to re-consider their decision.
Both TT and Yeo Ning Hong then agreed to rescind their resignation and
continue their services, with the condition that LKY reign in his wild card
son. Dhana told LKY that he could not continue but that he would stay on
until the next general elections, upon which he would not be contesting.

> > This so called "slapping incident" was not reported in the SHIT TIMES nor
> > was there any denial from the goverment at that time. Rumour about this
> > incident have been circulating for years. If what you claim is true, then
> > whoever deny it is a LIAR. Worse still we have a violent man ruling
> > Singapore. Now, the ball is in the gorverment's court , to deny again or
> > admit that this incident did really took place. Silence is not a good way to
> > protect the integrity of all those who witness the incident. It leads to
> > implication of cover.

"truth" wrote in message
Have you heard 10 years ago, in 1997 election, there was grapevine
that the public saw how LHL scolded WKS for wanting to make a post-
election result analysis to the media.

According to taxidrivers grapevines at that time, LHL scolded WKS
without giving face to WKS as the media cameramen and media people
were rollling their camera on the desk on the activity of them.

The grapevine of taxidrivers at that time said the scoldling was a
raising of voice by LHL at WKs and it was clearly heard by all their
papies 3-legs people there, in that he told WKS sternly that "it was
not the time yet to dicusss the results of the election".

Perhaps his riling on WKs was further compounded by the hot
environment as there not aircon nvironment at that place of meeting,
Furthermore his raising of voice slamming at WKS was attributed by the
noisy environment there.

His sterned shouting voice on KWS stunned everyone into speechless.
WKS was stunned and kept quiet from it. He just "let him do what he
liked".

If WKS were to shout back at him or scold him back, he will surely
"lose" his job and not what he is today. So one has to be clever to
play the "right game" and to" obey stupidly" and to "keep quiet" even
if spitted at the face.

The media later cut the recording of tape of that footing of their
recordings of scoldings and amonishment on WKS so that it was not
shwoon on TV.

Those grapevine rumours fro mthe paies supporters said it was hard on
WKS for being scolded pulicly by LHL. It was shameful day for them as
they see how those 3-legs suppoorters were watching the "cat fights"
of them. Luckily, for his endurance of sufferings, WKS was rewarded
with a DPM job.