From theonlinecitizen:
The rumor that Chan Chun Sing is a distant relative of Lee Kuan Yew appears to be untrue based on this newsclipping from 1988.

Newspapers - Thanks, Mum
newspapers.nl.sg
Thanks, Mum Chan Chun Sing, 19, one of four top scorers from Raffles Junior College, who had six distinctions, a distinction for the Mathematics S-Paper and a merit for the Economics S-Paper: "My mother is a machine-operator. I do not stay with my father became my parents are divorced." 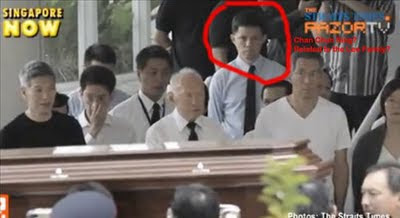 Zanzibar wrote: May 21, 10:31 am
On May 20, 10:21 pm, adam <> wrote:
> Chan Chun Sing is the bloody nephew of the chief crook Lee Kuan Yew.
> That's why Chan Chun Sing was placed in Tanjong Pagar GRC to get
> back-door entry into 2011 parliament.
> The thing is the crooked Lee family hid the blood ties and hope the
> daft Singaporeans will never know about another blatant case of
> nepotism.
> But the Lee bastards forgot that the internet will expose all their
> shit very fast. The Lee bastards have nowhere to hide now. Thank God
> for the internet.

Saw that picture of him standing behind the Pm family which seemed to
show clearly that he was related to the PM by blood as the seats there
were for them of close family of the Lees.

Seriously, as Chan chun sing is minister; he is of public interest
now, and thus the Pm should be honest to explain it to the public
about his and family relationship with him .

Given that Chan chun sing's direct entry to appointments as minster
with only a acting minister post temporay to camouflage him to his
post, there should be explaination of his relationshions with the PM
on what interest he has with Chan and his family

And given that he was a direct backdoor entry candidate to get to the
public money of 2 million dollar minsterial pay per year job with
potential of 9 months bonus, the PM should explain his relationship to
the people on how his family was related with him..

And so, if Pm is honest and transparent and is true to himself to the
people of Singapore, he should come forward to explain publicly as to
who he is.

THe Pm should explain who is he related to him or family blood, and
why this man was chosen than of others equally qualified others
available in,the inside and outside of the pulbic sector and any
Singaporeans, etc

Over the Vesak Day holidays, an intriguing picture of MG Ki Chew has emerged ( http://imageshack.us/photo/my-images/849/unledaic.png ). At the recent funeral of Mrs Lee, he was seen standing at a place normally reserved for close family members (cousins, uncles, nephews etc).

Scroll down to 1/3 of the page and you will see Chan Chun Sing among the
close family of Lee Kuan Yew mourning behind the coffin of Mrs. Lee Kuan
Yew:
http://singstatistician.blogspot.com/2011_05_01_archive.html

So who exactly is MG Ki Chew? Could he be the next Prime Minister of Singapore?

Shortly after I published this posting, the Cabinet line up was released. MG Ki Chew is off to a flying start. He is the new Acting Minister for MCYS. In getting this position, he bypassed at least 2 PAP hopefuls who were eyeing the seat.