While I hate to bash a highly reputable local University, that is ranked amongst the top ten in the world, but the truth must be spoken, and hopefully this will help make the University even better in the longer term.

For parents, if you are watching this video which was forwarded (the link) to me via WhatsApp, the girl or the boy could be your kids when they enter the University or Polytechnic in future. Imagine if they are subjected to such sexually demanding acts? This is just the orientation. Are they going to be doing this to each other naked upon graduation? Perhaps, it is a good idea after all, to send them to some foreign university instead.

Have this got something to do with the kind of foreigners we are enrolling into our Universities and Polytechnics? Some, of course, were reported to have dubious qualifications from their home countries. Weren't they supposed to have more superior genes than our locals?

For our future references, here are some valid points mentioned in some reports. Starting from Stomp.com.sg, which I believe is where the video originated.

[ A tertiary school's orientation game depicting a guy pushing his crotch against a girl's face has raised some eyebrows for being too sexually-suggestive.

Stomper Anonymous sent in this video to Stomp, which she got from a friend.

In the clip, the students seem to be playing a game, where the guy does a pumping exercise on top of the girl -- with his crotch against her face.

The other students even told her "not to cover" her face, as they purposefully push him down.

Does this really promote bonding, as they say, or does it go too far?

According to blogs, camp facilitators have made girls lick whipped cream off a guy's chest or neck.

There was also a sexual-themed activity called 'Secret Pals'. “They wake the participants up at 3 a.m. and blindfold them, and make the girl sit on the guy’s lap,” an organiser said.

Other games include passing MnM chocolates to each other using only their mouths.

Stompers have also written in to share about chalets where students were made to take off their shirts.

According to AsiaOne, students from some schools said their orientation camps often included risque games and forfeit, while others are milder. ]

The Straits Times have this to say:

The girl had to lie on the floor, then the guy pretended to kick open a door and say, ‘Kor kor (big brother) coming.’ The girl had to respond, ‘Mei mei (little sister) don’t want.’ He then kicked open her legs and did push-ups while lying on top of her.
- Kim

These were just examples of the sexualised activities that hundreds of freshmen were made to participate in some of the National University of Singapore’s (NUS) orientation camps in the past two months. One was asked whose bodily fluids she would like to drink, while another watched her peers re-enact an incestuous rape scene. 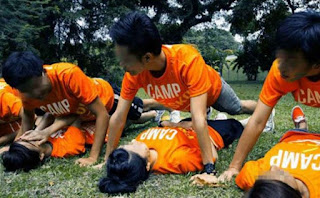 Some students said they attended the camps to make friends, but they were instead pressured to take part in increasingly sexualised activities.

“Every time I didn’t take part, I was so scared that the orientation group would write me off as a prude and ostracise me,” said Chloe, who requested not to be named for this reason.

She added that the camp’s cheering and chanting was also sexualised, with references to the male anatomy, that made her blush.

“(The cheers) were so senseless. I hated them, but apparently it’s tradition that has been passed down from previous batches,” she said.

Another 19-year-old freshman, Kim (not her real name), told TNP that she was grabbed from multiple directions by different students during a game that involved soap and water.

“I didn’t even know where they were touching. It was so physical. I ended up in pain, and it was a scary experience,” she said.

One of the forfeits for a game required a male and female freshman to re-enact a rape scene between a young man and his younger sister, which was even uncomfortable to watch.

The activities have also become raunchier, with this year’s games at the National University of Singapore (NUS) being the most lewd and explicit.

In 2006, The Straits Times (ST) reported that activities involving lip contact and the washing of armpits at the Nanyang Technological University (NTU) and the NUS orientation games left students flustered.

This was followed by a similar report in 2008, in which ST quoted an NUS student who sat out an activity where male students did push-ups on top of female students.

In 2011, The New Paper reported that a girl cried after orientation games at the Singapore Institute of Management-University of London became too close for comfort.

The activities were similar to those at NUS in 2008, with male students leaning over female students on the ground.

In 2014, NUS was again in the spotlight after complaints that a male student was stripped to his shorts before being blindfolded and bound with tape, as female students licked whipped cream off his neck.


LAWYERS: SUCH ACTIVITIES COULD BE AGAINST THE LAW

Ms Jolene Tan, 33, programmes and communications senior manager for the Association of Women for Action and Research (Aware), said such activities are uncalled for, and that more should be done to protect the students.

“Such activities are very inappropriate, and promote bullying, the objectification of women, and is an unhealthy trivialisation of sexual violence,” she told The New Paper.

“They are alienating rather than bonding, and potentially traumatising to anyone there who has experienced sexual assault previously.”

She added that new students feel pressured to take part or be left out, resulting in many choosing not to voice their discomfort.

“Even if they are uncomfortable, they won’t say it because they don’t want to be a spoilsport.

“The whole culture needs to change. There needs to be a policy in institutions that is explicit about harassment.”

A survey of 500 young people aged 17 to 25 conducted by Aware in 2014 found that one in three had experienced sexual assault or harassment, said Ms Tan.

Lawyers told TNP that such activities outrage the modesty of women, and police reports should be made by individuals who feel violated.

Criminal lawyer Ravinderpal Singh of Kalco Law said such activities could easily be considered to be a violation of the Penal Code, which criminalises any word or gesture intended to insult the modesty of a woman.

“If the woman takes offence and feels outraged, she can make a police report,” he said.

“The school can also be liable if it is negligent, and fails to provide a safe environment.”

He added that the school has a duty to ensure the well-being of all students.

“You cannot evade liability even (if students sign) a form,” he said.

“There definitely should be checks done by the school to ensure that such things do not happen.”

Another criminal lawyer, Mr T.M. Sinnadurai of Regent Law, said: “The words they used are gross and could be considered offensive. In my opinion, it is wrong.

“Even if there is no physical touching, it is still a violation.”

The father of a 20-year-old girl said that if his daughter were placed in a similar situation, he would immediately make a police report.

“I would be outraged if someone did something like that to my daughter,” he said.

“No one should be forced or pressured into such activities, and a police report should be made.

“A school is a place where you have to learn to get your morals right. If the school teaches these things, then it is the wrong place to start your learning.”

Each time, the replies from the universities to queries follow a similar pattern.

The universities would highlight the guidelines in place and that they do not condone such behaviour. They would then promise to investigate and take action against anyone who breaches the rules.

They also mention that participation in the camps is voluntary. But freshmen say they feel pressured to take part for fear of being ostracised.

In recent years, the institutions have implemented channels for feedback.

Yet, a decade on, nothing has changed. ]

And this is from the Horse's Mouth.

An article in the NUS's Campus Eye (blog.nus.edu.sg) written in 2014 reproduced here for quick reading and reference:

[ SINGAPORE, Sept 18 (Campus Eye) – Orientation camps at the National University of Singapore (NUS) often feature sexual activities, according to students from the university.

These activities came to light on Jul. 31, when a letter criticizing these activities written by an NUS student’s aunt was published in the Real Singapore, a social-political website.

“The camp facilitators were making the girls … lick (whipped) cream off his neck, his nipples and also rub (their) hands on his thigh, trying to sexually stimulate him,” wrote the author, who identified herself as “Ms. Ng”.

Most students who were interviewed had either seen or heard of similar activities.

A student who attended a camp organised by Kent Ridge Hall witnessed forfeits such as Seven Wonders, in which two students touch each other as instructed by their peers, and male students doing push-ups over females.

The student, who declined to be named, said these activities were passed down from earlier generations of students.

Forfeits are typically unplanned, and agreed upon by leaders and participants, including those who are not doing the forfeits, just before they are done.

“They wake the participants up at 3 a.m. and blindfold them, and make the girl sit on the guy’s lap,” Lau said.

An NUS spokesperson told the Straits Times that participants can opt out of activities they are uncomfortable with.

“Some of them (orientation group leaders) didn’t know their limits … If you didn’t want to, they would say no,” Yong said.

In contrast, Tembusu College orientation organizer Alison Chew said group leaders know where their limits are, and would allow participants to opt out.

Chew said she trusted group leaders to be responsible for the “image of the college” because they were interviewed.

Both Chew and Lau also said participants were encouraged to give feedback to their leaders, which were then used to make changes to the camp program.

However, the anonymous Kent Ridge Hall camp participant felt these activities were a reflection of society’s patriarchal attitudes.

“I don’t think we should be blaming the students; we should all just reflect on our own culture that sexualises women on a daily basis.

“We should be looking at the kind of images, the kind of messages we allow in society, through media, and through just our daily conversations because, after all, patriarchal attitudes are inherited,” she said.