Another first for Singapore. The first bank robbery since the passing of our great leader Sir Mentor Lee Kuan Yew. It is also the first by a Caucasian, and also a first by an Australian. And it it pretty coolly done too. No weapon used according to various reports. Just ask for the money or else he would do something, like pissing on the sofa, perhaps.

And guess what, he got away with only $30,000. What a stingy teller. From the news, seemed like the guy is well disguised glasses and/or hat or cap, and the Police do not seem to know how he looked like from the CCTV. He is probably a small guy, as the police were seen in the video busy looking for him in the rubbish bins of houses nearby.

I wonder if he had his boat ready. To do such a Italian Job (or shall we call Singaporean Job), this is first priority. Unless he had something else, like a big Drone that can fly him to JB or Batam.

Let's look at some news reports for reference and discussions:

In a statement on Thursday, police confirmed that a case of robbery had occurred along Holland Ave at 11.25am, but did not state which bank it was. They added that their investigations are ongoing.

According to reports from Shin Min Daily and Channel NewsAsia, here’s how it supposedly happened.

At around 11.25am 7 July 2016, a Caucasian male wearing a cap slipped a piece of paper demanding money at the StanChart branch in Holland Village.

No confirmation on whether he was armed.

He took off after the heist.

Now the police have launched an islandwide manhunt for the man.

No injuries have been reported.

This is supposedly Singapore’s first bank robbery in over a decade, the last one taking place in 2004.

Police are rather quiet on the case. The secrecy might be justified due to the supposed threat level of the case, and even the biggest source of news in Singapore found themselves in the dark at this wholly-unexpected turn of events.

The suspect is on the run after the robbery which took place at about 11.25am, the police added. TODAY understands that the robber slipped a note at the counter to a young bank teller, under 30, and escaped on foot towards Chip Bee Gardens. He is believed to have made off with about S$30,000.

When contacted, a StanChart spokesperson said all its employees and customers are safe. "The bank immediately filed a police report and is working closely with the police on the investigations," said the spokesperson. He noted that the customer and staff safety are the bank's "top priority" and "our branch staff are all well trained to react to such situations".

Police have cordoned off a large area in front of the bank. Eyewitnesses reported heavy police presence in the area around lunch time on Thursday.

According to a nearby shopkeeper, the police asked for camera footage that captured the bank’s entrance but the cafe did not have any. She said she did not hear anything out of the ordinary before the police arrived.

A business development executive, Mr Tan Chia Latt, 52, saw about 30 policemen walking around in the area in bulletproof vests. “When I saw them wearing bullet proof shirts, that means something is up,” he said.

According to a Mediacorp hotline caller who had been in Holland Village, the police had stopped him and asked if he had seen a male Caucasian wearing a cap. 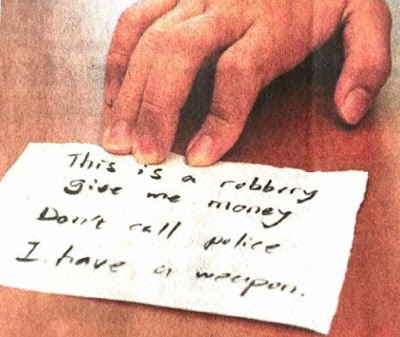 Standard Chartered bank’s Holland Village branch was robbed on July 7 morning at about 11.25am, and according to Shin Min Daily News this was the note the robber handed to the bank teller before she quickly handed him $30,000.

From the various reports in the newspapers and social media, it is established that the suspect is is a tall, skinny, Ang Moh Australian who was wearing a grey hoodie and mustard-coloured pants. There were no security at the bank when the robbery occurred.

The Business Times reported in March 2016 that Singapore banks are in for tough times in 2016. StanChart had said to the reporters at that time that it had provided for 0.7 time of bad loans, after including collateral value.


Mystery heist: how did robber steal US$22,000 from Singapore bank armed with nothing more than a piece of paper? (SCMP)

Singapore police said on Friday they are hunting a man who managed to steal more than US$22,000 from a bank using nothing but a piece of paper.

The suspect, described as Caucasian, strolled into a Standard Chartered branch in Holland Village, an expatriate enclave of the city, around lunchtime on Thursday and handed staff a note with his demands.

A police spokesman confirmed the robbery and said no weapon was used, but gave no details of the note’s contents.

One resident, who lives in the Chip Bee Gardens estate across the street, told The Straits Times that police visited his home with a picture of the suspect. He was described as Caucasian and dressed in a grey hoodie and mustard trousers.

In a statement later, a Standard Chartered Bank spokesman said that no employee or customer was injured in the incident.

The spokesman added that the bank has filed a police report and is assisting with investigations.

“We would like to highlight that the safety of our customers and staff are our top priority and our branch staff are all well trained to react in such situations,” the spokesman said.

Bank robberies are rare in Singapore, whose tough stance against crime and strict ban on private gun ownership have made it one of Asia’s safest cities.

The last attempt was in November 2008 when a man disguised himself as a woman threatened tellers with what he called a “bomb” in a paper bag. He was restrained by bank staff and arrested.