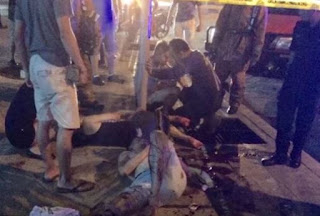 The IS terror attack at Puchong, KL, Malaysia, is now the closest to Singapore, displacing Jakarta from the proximity list. And the bad news is, it is getting nearer and nearer. So how ready is Singapore for the first attempt by IS to launch an attack in Singapore? Given how easily Mas Selamat escaped, and how easily bank robbers can obtain what they want from softies bank officials, we have our doubt, seriously.

Since the declaration of the so-called Islamic State in June 2014 in Syria and Iraq, the Malaysian authorities have supposedly stopped nine plots to attack Malaysia. However, they were unsuccessful in detecting and disrupting the attack in Puchong. The nature of the current wave of terrorism had changed from group attacks to networked attacks making it a challenge even for the best security and intelligence services to prevent all the attacks.

A week before the attack in Malaysia, Mohd Rafi Udin alias Abu ‘Awn al-Malizi appeared on a video released by the Islamic State Philippines on 21 June 2016, threatening Malaysia. In response to the video, Malaysian Police Chief Khalid Abu Bakar challenged Rafi Udin who is from Negri Sembilan, to return home from Syria and take the authorities head-on, saying: “If you dare to make threats from afar, come back here and do it.”

The IS attack in Malaysia, despite continuing counter terrorism operations, demonstrates that the IS ideology has spread and established a regional presence, in Malaysia, Indonesia, and Philippines, with support in Thailand, Singapore, and Brunei.

Since the Russian air campaign in Syria in 2015, IS has suffered but continues to replenish its losses. Although the IS threat in Iraq and Syria has plateaued, IS is in a growth phase in Asia, Africa, the Middle East and the Caucasus. To counter the threat, governments will have to develop greater intelligence and operational capabilities both in the physical and cyber space to counter the extant and emerging threat. With its mastery in exploiting the social media, IS succeeded in creating pockets of supporters and sympathisers throughout the Muslim world, including in Southeast Asia.

In addition to building greater capacities to monitor and counter the threat, the strategy of governments and their community partners should be to reach out to vulnerable segments of Muslim communities to prevent radicalisation and enhance detection.