First, as the Minister of Health, then as Minister of National Development (HDB) and now as Minister of Transport, this MTS (Malaysian-Turned-Singaporean) will go on changing another 10 ministries, and still look like Henry Thia in his comic best.

Today, in his mumbled speech, this clown fumbled yet again, when he practised what he used to do in previous ministries, and that is to Taichi (push to someone else) the problems his ministry faces, to a fact-finding source in Hongkong. Not for giving wrong facts, but for announcing the facts, instead of hiding it. It should only be announced when somebody died. 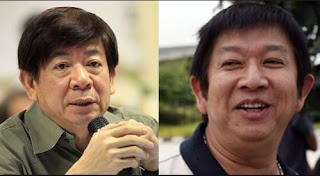 FactWire, a Hong Kong based news agency “founded by 3,300 Hong Kong people” has released a public statement to deny the allegations made against the agency by Singapore’s Transport Minister Khaw Boon Wan.

Mr Khaw had, during a visit to the SMRT’s Bishan Depot on Wednesday (July 13) suggested that the recent expose by FactWire was intentional so as to mis-spun a “routine matter” into a  controversy.

The minister also suggested that the recent defective trains issue had been used as a “convenient bullet” and Singapore was caught in a “crossfire” due to FactWire’s anti-China political agenda.

We are caught in a crossfire and there are factions in Hong Kong who wanted to cause some difficulties for mainland China. I have no inside information on whether that is true or not, but it’s possible.

Unfortunately, we become a convenient bullet and collateral damage, the clown said.

FactWire regrets false statement by Singapore’s Transport Minister
FactWire said in its statement that the agency “regrets the false statement” by the minister and clarified that it serves the public, independent of any commercial or political interests.

The agency also noted that instead of of taking responsibility for an incident which has damaged the Singaporean public’s trust in the authorities, Mr Khaw choose to blame FactWire for exposing the cover up of the recalls of defective trains.

FactWire said that in publishing an article, its editorial principle is to ensure that the news must involve significant public interest and that it has acquired “impregnable evidence”. The agency’s professional judgment will not be overriden by any commercial or political considerations.

Probably taking a swipe at Mr Khaw, FactWire added:
As a news agency committed to serving the public, when public officials are riled by our reporting, it is merely proof that we are doing the right thing.

“Trains were being returned to China for repairs due to hairline cracks could have caused undue panic. Going public for something that was not a major event might have caused unnecessary panic to the layman, noting that to engineers, not all cracks are the same. If all cracks are have to be reported when they do not cause any of those safety issues then they have to think about what is the impact on the ground. Looking back I think it’s understandable. We learn as we go along, sometimes even routine matters can be spun out of control as it happened in this case.

…So if the rectification requires us to take away too many trains … I’m quite sure Ministry Of Transport together with LTA would have also decided even though it’s not a safety issue, because it will affect availability of trains, I’m sure they will go public and explain why, we will now have to slow down on our program of increasing the capacity.”