Temasek Holdings-owned monopoly power supplier SP Group yesterday (Sep 29) announced that the increase for the next three months from Oct to Dec will be 2.1%. This makes up a cumulated total of 18.8% for the year of 2018. 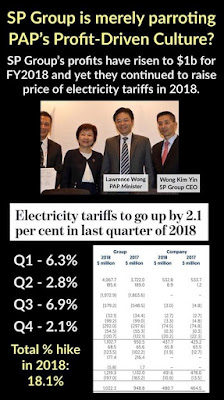 In 2017, SP Group posted a S$948 million net profit. With the latest increase, the Temasek Holdings-owned subsidiary is expected to cross the billion dollar profit mark and boost after-tax profit by a further S$178 million.

Corruption and nepotism remains the primary cause behind the exorbitant hike in energy prices, despite falling oil and natural gas prices. Approving the electricity tariff raised is the Energy Market Authority (EMA), whose Chairman Ng How Yue is the husband of PAP MP Tin Pei Ling.