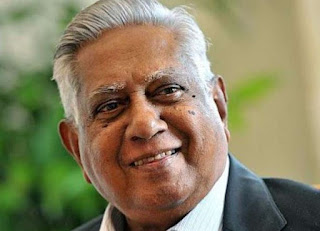 Mr Lee gave the latest update on Mr Nathan, 92, before the Malay portion of his National Day Rally speech, adding that he last visited Singapore's longest-serving president at the Singapore General Hospital (SGH) on Friday.

"But he is restful and well taken care of by the team of doctors and nurses. His family asks me to thank you for all your messages and good wishes to him," he said.

Mr Lee also recalled how Mr Nathan, who served two six-year terms as head of state from 1999 to 2011, was in the audience for his National Day Rally last year.

"After the rally, he wrote to me, in his beautiful handwriting, at the age of 91, to congratulate me on my speech."

Mr Nathan suffered a stroke on the morning of July 31 and has since been warded in the Intensive Care Unit at SGH.

Since then, get-well wishes have poured in from visitors, among them senior civil servants, long-time friends and more recently, Singapore's first Olympic gold medallist Joseph Schooling.

Mr Lee had previously visited Mr Nathan on Aug 5, following his return from an official trip to the United States.