PM Lee: Why I must sue Journalists 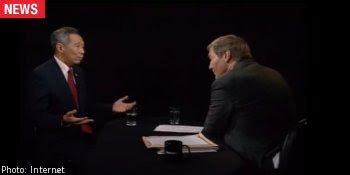 Caesars Singapore posted:
Post subject: PM Lee on why he must sue journalists

Charlie Rose previously interviewed Minister Mentor Lee Kuan Yew and made many references to that interview throughout his conversation with PM Lee.

In the hour-long interview, PM Lee voiced his views on a number of issues ranging from the Nuclear Security Summit, US President Obama's global leadership and the US relationship with Asia and Singapore.

He also analysed Singapore's sensitivity towards the issue of nepotism.

Here are excerpts from the interview:

Charlie Rose: All right, well, you seem to be sensitive -- you were -- to the issue of what's called nepotism.

PM Lee: We are very sensitive.

Charlie Rose: Tell me about the sensitivity.

PM Lee The whole of our system is founded on a basic concept of meritocracy. You are where you are because you are the best man for the job and not because of your connections or your parents or your relatives.

And if anybody doubts that I as prime minister is here not because I am the best man for the job but because my father fixed it or my wife runs Temasek because I put her there and not because she's the best woman for the job, then my entire credibility and moral authority is destroyed. I'm not fit to be where I am.

And it's a fundamental issue of fitness to govern. First you must have the moral right, then you can make the right decisions. It's a basic Confusion precept.

Charlie Rose: Only when you have to moral right can you make --

PM Lee: Then can you govern and make the country right.

And in Singapore people expect that. So if there's any doubt that this is so, and people believe that I'm there because my father fixed it or the whole system is just make-believe, then the system will come down. It's not tenable.

AleXX posted:
He claimed that he is the best person to be the current PM (with help of the
formation of the leegime trinity- The Son-The Father-The Holy Goh).
Coincidently, his wife is also the best person to be the chief of Temasek.
Coincidently, most of his families, relatives and cronies including his
cousin Wong Cunt Singh were the best people and indispensable to rule
Singapore. What a big political coincidence!

From: Maximillian Caugilia
Too bad that when he believe in his own BS he expects others would
also do the same.

LHL seems to imply that only his royal famiLEE has the super genealogy
to always have the best person to head major Singapore's political,
financial, military and business positions. What a load of crap.

Come on, Mr. LHL, do you seriously think that you can fool other
people all the time? What have you done to prove that you are the best
person on the job and for the job? No one in the global and regional
political arena is taking you seriously - and that is why Charlie Rose
asked that question. Boy, we have paid multimillions for a stupid fool
as the CEO of Singapore.