Another MRT suicide - this time at Bedok station 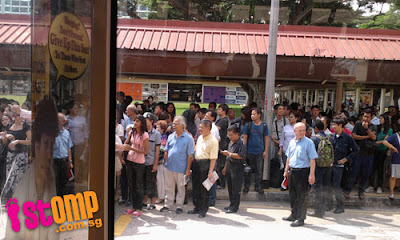 Man jumped at Bedok MRT: Was suicide a result of losing $70K at casino?

A man committed suicide by jumping onto the track of an oncoming train at Bedok MRT station, causing eastbound trains from Eunos to Tanah Merah to be disrupted today (May 7).

According to the news report on The Straits Times website, the incident occurred at 1.42pm.

The track was blood stained, caused by the train wheels rolling over and crushing the man’s body against the metal track.

The man’s body was seen covered with blood and his flesh exposed on certain parts of his body.

One of the man’s arm was also severed and seen lying a few meters away from his body.

It is not known whether the victim is still alive or already dead (which most likely will be the case).

The cause of the incident is still being investigated.

SMRT said that is had deployed buses to assist stranded passengers at the two MRT stations.

It is believed that the man is an unemployed who was retrenched during the downturn and is unable to sustain his lifelihood due to the high cost of living in Singapore. With foreigners taking up jobs, this aged man stands no chance of getting another job.