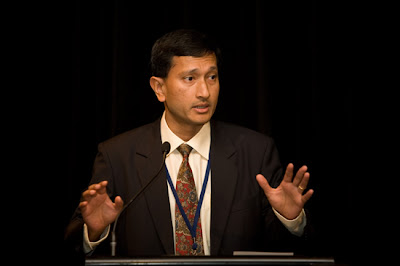 TOC has replied to Minister Balakrishnan's accusations of "propagating these falsehood". Please go through TOC's findings and judge for yourself. The truth is sometimes like an onion - it comes in many layers. I went through the comments in my last posting and a few people say its the couple's fault they end up homeless. It is almost always true that when people reach the point that they need to seek govt help, you can examine their lives and find that they could have done much better for themselves. This, I feel, is irrelevant because if everyone manages their life and finances well, nobody will need to go to Minister Balakrishnan's MCYS for help and he can just shut it down. The only relevant questions are whether they really need govt aid and whether, as a society, we want to help them or not. If the govt does not want to render help, there is no point examing their lives to pin the blame on the individuals. At the center of the truth onion are very simple facts : an unmarried couple wants to get a rental flat which is all they can afford but are prevented from doing so by various rules which they cannot overcome so they ended up it a very difficult situation withut a home.

"The people we have who insist on staying in beaches and parks are not first timers and not people who have bought their first flat or first rental flat. These are people who have almost always sold their second flat or a third flat, have unfortunately dissipated the subsidies and cashed them and now have run into problems. .Members would have faced this problem which almost become emotional blackmail" - Vivian Balakrishnan[Link].

You have to read what Minister Balakrishnan said a few times to fully appreciate what he is getting at. So most of our homeless people actually emotional blackmailers? They are blackmailers because they had gotten into financial trouble and were forced to sell their homes to repay creditors? They are blackmailing PAP MPs with the sadness of their situation? That the minister see people losing their homes due to financial difficulties as a form of blackmail says a lot about govt attitude towards those in need.

Singapore is a city-state and like many cities housing is expensive. Because land is scarce in a city, the free market can never bring forth a solution that results in everyone being housed. That is why you find some form of govt/public housing in cities around the world. In Singapore, the majority of the people stay in public housing. Within this public housing system, we have rental flats which is suppose to be the ultimate housing safety net. The govt like to say the people staying in rental flats enjoy subsidies (read the minister's comments) i.e. market subsidies. However, these 'market subsidies' are needed because there is a wide income disparity - which results in a gap between what the poor people can afford and market rental. When the subsidy is large, it is not because the govt is generous but because we have big disparities in income. There are roughly 4500 people in the queue for rental flats. The total stock of rental flats is 42,000 but will increase to 50,000 in 2012 based on current HDB plans. The waiting time for rental flats is 18-30 months long. As the cost of living increase and income gap remains, the demand for rental flats will go up. Some time in the early 90s when we were heading for the Swiss standard of living, demand for rental flats fell and near 100% home ownership was believed to be attainable. But today, we after another 2 decades of GDP growth, we see poverty rising and demand for rental flats increasing because our income gap ballooned and that is what drives the demand for rental flats. You have 2 solutions to fix this problem - (a) reduce the income gap (b) build more rental flats to match the genuine need for these flats. HDB decided to build more rental flats but not enough to meet the demand. So they decided to implement various rules to kick people out of the queues[HDB rule change for rental flats].

" HDB will continue to permanently debar those who have enjoyed 2 housing subsidies. This is a current criteria, and we’ll maintain that. We will also retain the 30-month debarment for those who have just sold their flats. " [Link]

I'm all for rules that disqualify those who are rich and have immediate alternative solutions to rental housing. But barring people who sold their flats for 30 months and permanently barring those who purchased flats twice from HDB just doesn't make sense. How would you know when you bought your 2nd flat from HDB that your business will fail or you will sick and have to use all your money for treatment? It is one of these rules that hit the homeless couple at the beach. Even if you are eligible, you have to wait for 2 years before you're assigned a flat...so what do you do in the meantime? Maybe stay at the govt shelter but shouldn't the govt build enough rental flats so that these people have a proper home?

The govt has adopted an approach to economic development with includes a policy of importing cheap foreign labor that has led to great disparity in income - the highest in the developed world. It is this income gap that drives the need for rental housing and housing subsidies. Instead of meeting the genuine demand for rental housing, the HDB under-supplies leaving those with very real needs to find other solutions - those who are lucky have other family members who stand in for the govt to give help ....others end up at beaches, void decks and govt shelters. Why is there a 2 year queue for public housing for those with a real need when resources are allocated for foreign workers hostels so that foreigners have a place to stay?

This is not a problem the govt cannot fix. The govt has more than enough resources to do this but is limited by ideological belief that 'welfare is a dirty word' and 'subsidies are bad'.....but these subsidies are neccessitated by the huge income gap which is a function of economic policies adopted by the PAP.

Al-Jazeera has responded to the allegations and maintains that their report
is "factually correct". The news channel acknowledges the couple previously
owned and sold homes, but maintains this is "not strictly relevant". The
fact remains that Samiah and Eddie have been homeless for two years and
their protracted efforts at accessing state support for housing fruitless.
Currently, they both remain ineligible for rental housing; Samiah because
she is still co-owner of a resale flat with her ex-husband, she does not
have full custody of her children (she shares this responsibility with her
ex-husband) and therefore she is not eligible to apply for a rental flat
now. Even when she sells her flat and obtains legal custody of her children,
she will still have to wait 30 months before she can apply for a public