Wake Up & Get Real! Your CPF Money is No Longer Yours 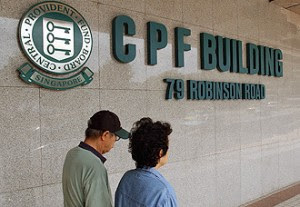 This CPF thingy is an absolute exploitation of human rights in Singapore. It is totally unacceptable for people who have no rights in our savings, meddle with it and even tweaked it without our approval. CPF law = PAP law, under such defintion we are doomed and Singaporeans will have no money for old age. I can’t imagine Singaporeans when they reached the age of retirement with money in the CPF savings, still seen picking cans and carton boxes in the street. I wonder how does PAP ministers sleep at night when the people sleep in the street with money in CPF controlled by PAP. - David

The important thing to note with this rule is that if the shortfall is less than half of the MS (or $58,500, at the current level), the remaining value of the property ($58,500 less the MS shortfall) becomes irrelevant.

This is different from a previous “property pledge” rule, as seen in this 2003 CPF Board press release, which allows members to choose to pledge their property for up to half the MS.

Under this rule, members who are unable to meet the MS are allowed to pledge their property for up to the full 50 per cent of the MS – rather than just making up for the shortfall. Therefore, if their MS shortfall is less than the 50 per cent of the required amount, the remainder from the property pledge would translate into funds available for withdrawal.

Another implication of this new rule will take effect in 2013. For members who turn 55 on or after 1 January 2013, the CPF cash balance can only be withdrawn after setting aside both the CPF MS and Medisave Minimum Sum. If this is not met, they can withdraw only $5,000 from their CPF account, regardless of any property pledge.

With the MS in 2013 being likely to be $135,000, assuming the current rate of increase of $6,000 per year remains constant, there may be more people who will face an MS shortfall when they turn 55.

The view that one’s HDB flat is an asset enhancement – something one can monetised for retirement – may increasingly become less valid, with the MS increasing every year.

Given all the significance this “property pledge” rule change has on CPF members, it should be asked as to why there was no announcement made in Parliament or to the media?

So when exactly was this rule changed?

Just imagine CPF as our National Savings Bank, telling its depositors that they can’t withdraw their savings in full at age 55 but withdrawal will be deferred only with monthly payouts starting at age 65.

If you happen to die between 55 to 65, you don’t even have a chance to smell your hard earned savings and good luck to you, thanks again to PAP. Why force this destined age group to leave their minimum CPF sum to their heirs ?

I think this must be the most restrictive and unequitable policy implemented by PAP as it seems to penalise those whose lifespan is between 55 & 65.

I am just wondering what the Government or CPF is doing with our money forcefully withheld under minimum sum, special account, medi-save etc.