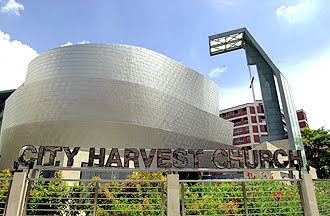 CITY HARVEST church is somewhat different from an ordinary place of worship - it uses stars and pop culture to stay relevant, counts a number of prominent business leaders among its congregation and its events have links all around the world.

Even founder Kong Hee calls himself a businessman on the church website and, together with his singer wife Ho Yeow Sun, owns two companies.

One is International Harvest, which company records say is a provider of corporate training services and motivational courses.

The other is fashion company Skin Couture, which has three boutiques - Ed Hardy at Heeren, Skin at Great World City and Christian Audigier at Ion. Clothes sold are described as 'glam rock' and follow trends in cities such as New York and Japan.

This rock theme is even extended to City Harvest's church services, which some members say are akin to attending a rock concert.

Church members have been known to go as far as adapting the most current Lady Ga-Ga or Black-Eyed Peas songs for concerts and celebrations, swopping out original lyrics for some of a more religious nature. These shows are complete with full-scale sets, costumes and coloured lighting, which go beyond an amateur production.
---------------------------------------------
.....you call this a pastor? 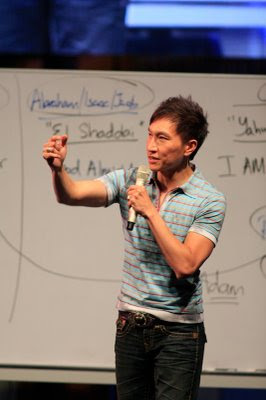 Then this must be the Pope. 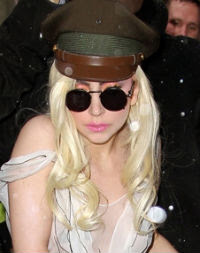 MEMBERS of Singapore's City Harvest Church are being investigated for the misuse of funds.

The Office of the Commissioner of Charities (COC) and the Commercial Affairs Department (CAD) is looking into some financial transactions involving several individuals and companies related or connected to the church. This was revealed in a joint statement by the COC and the Singapore Police Force.

Seven individuals were detained in a raid at 6.30am on Monday by the CAD. During the raid, CAD visited their offices and secured records and accounts as part of the investigation.

By lunch time, 12 people were said to be assisting in investigations which involve charges of falsification of accounts and criminal breach of trust. The charges are said to be unrelated to previous investigations into City Harvest's purchase of a $310 million stake in Suntec City Convention Centre.

The COC had received complaints of misuse of church funds and informed the CAD after assessing that some financial transactions may need to be investigated.

The 33,000-strong megachurch announced two weeks ago that it had become a co-owner of the downtown commercial property, which houses a convention and exhibition centre.

The money spent includes renovation and rental costs, the church said. CHC has not created a separate business entity for the purchase of the property.

coolguy8888 wrote:
last time in 2007, there was an article, Sun Ho and her hubby Pastor Kong Hee have 13 units of Horizon Gardens, each one is 2M....haha that time already need to whistle blow liao....wait until now; Here is the section of the ST article published on 29 Sept 2007....

But two other parties said they wanted to have their say as well.

One is a group of individuals – including pop star Ho Yeow Sun and her husband, Kong Hee – who own 13 units. All signed the sale deal and said they wanted to participate in the hearing to ensure the sale goes through.

The other is the consortium led by Hotel Properties (HPL) that signed the $500 million deal in February to buy the estate."

Government should look very carefully into this.

Waterloo Temple, take in millions of donations, but donate to charity and public needy. Donated hundred of thousands of dollars to President Charity Show and Community Chest every year

The right thing to do under these circumstances, should be that all money collected as thithes and goodwill offerings should be diverted wholly to missionary work, paying of pastors, full-time church workers, pastoral staff and the daily maintenance and orderly running of the churches and their sister churches in the region.

It's pretty obvious that the deal must have been given a nod of approval by authorities, who jolly well knew the implications, before it was allowed to proceed.
As for the probe, its just a q&a session - its not an investigation.

From commercial point of view-to buy an existing underutilised commercial building is better than no end digging that obviously against the idea of eco- friendly.

After all, Singaporean has been complaining the island is flushed with FW, FT.....CHC resort to rejuvenate the underutilised place is just doing the businessman in town a favour.

From religion point of view...if it is willing buyer/willing seller basis, why people from other religion bother to intervene.

Buying a stake can eliminate problem like inefficiency in allocation of construction cost as seen in many other projects. Indeed the church -goers should have more peace of mind that money has less chance to be "mismanaged". All shareholders and stakeholders interest will be more well taken care of vs private development.
--------------------------------------------
More craps from Kong Hee.

> I find this practice of the churches in Singapore disgusting.
> Members are subtly coerced into donating 10% of their
> monthly salary to the church.
> This should not have happened. It must be stopped. It is a
> form of extortion like gangsterism.
> If the church is good and sincere, it should stop this practice.
> Some churches in Singapore has become so rich thru such
> coerce collections that they are sitting on a huge pile of
> cash. These money should be used to help the poor and
> underpriviledge of society. That it has now been abuse to
> go into mega business venture is a very worrying trend.
> Why are the papist leegime so reluctant to rein in these
> unethical activities of the churches ? Are there too many
> christians in the papist cabinet ?

To my knowlege there is no forcing of donations. Generally most of the
attendee dont pay except the rich who got their salary or income very
easily through effortless holding of multiple high powered posts with
influences, thus making themselves look sinful if they dont donate
some away.

Donation is a personal thing. No one checks on you or to see if hand
in any money or not. In some the donation box is there for anyone to
put in or into the "coffee strainer bag"..

And so, seriosuly speaking, no one needs to walk over to the box put
in anything. And no one checks on you or train their eyes to track on
you if you dont it. In short nobody will ask you to do it.

Even in waterloo street temple, the donation box is there for anyone
to put in their donations, and no one will ask you to do it.

To many the problem of giving is between them and the God. If oyu have
no money dont give. give only with a willing heart.

One can still lgive to the poor or charity directly and this also
means they also have their own priority of heart to give.which one
first.

The Church offer eternal life and a place in heaven
to the believers.

Like all things in Singapore, we have to pay for the good
things. ... there is no free lunches, you know...not even
in Heaven.

Naturally, Singaporeans do not complain about paying 10%
of their earnings to the Churches....they regard it as booking
fee for a place in heaven and for eternal life.

Subject: Re: Why are churches allowed to coerce members into paying 10%