truth comment: trust the words of these papist nincompoops at
your own perils.

Despite promises made by PAP leaders to slow down to the inflow of
foreigners, Singapore companies, including Government-Linked Companies or
GLCs which dominate the domestic economy, continues to hold mass-recruitment
exercises overseas.

Finance Minister Tharman said in his recent Budget speech in the first week
of March that Singapore has to boost its labor productivity and reduce its
perennial dependence on foreign workers.

Just as when he was making his speech, a GLC - Keppel Corp has put up a
recruitment advertisement in the Malaysian newspaper The Star seeking
Malaysians to fill various positions in Singapore: 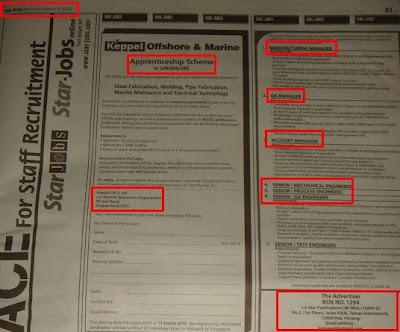 The above advertisement was listed on The Star on 6 March 2010 in The Star
by Keppel Offshore and Marine, a GLC owned partly by Temasek Holdings for
job vacancies in Singapore for managerial and engineering positions.

The candidates are advised to send their resumes to the Human Resource
Department of Keppel Corp Ltd at 50 Gul Road, Singapore 629351.

The PAP has always argued that foreign workers are needed to take up jobs
shunned by Singaporeans.

While Singaporeans may not be keen to work in Keppel shipyards, they should
be willing to work as managers and engineers there.

Singapore produces over 1,000 engineers yearly from NUS and NTU. Are there a
shortage of engineers in Singapore? Why does Keppel need to go all the way
to Malaysia to recruit their engineers? Are Malaysian engineers more highly
trained and qualified than Singapore engineers?

It is most disheartening that a GLC has openly disregarded the government's
call to reduce Singapore's dependence on foreign workers. How can we expect
the other companies and MNCs to follow suit?

Based on anecdotal evidence from our readers, companies are still recruiting
foreign workers who are preferred over Singaporeans due to their much lower
cost and willingness to work for long hours.

One GP we spoke to claimed that he does about five to ten work permit
renewals for foreign workers a day.

It is quite obvious that the PAP is only paying lip-service to reducing the
influx of foreigners into Singapore which is no more but a gimmick to
placate rising frustration, discontent and anger among Singaporeans ahead of
the next general election.

The rosy employment figures provideded by the Ministry of Manpower cannot be
trusted either as they lump PRs and citizens together as one category -
"locals". The exact unemployment rate and numbers of citizens in various
industries remain unknown to this very day.

The daily propaganda being churned out by the state media contrasts the
reality on the ground - foreigners are still coming in droves and
Singaporeans are experiencing a tough time getting a job which pays well.

As Senior Minister Goh Chok Tong admitted himself, the recent "changes" in
policies do not mark a major "U-turn" in the PAP's much maligned "FT policy"
and that the number of foreign workers may actually increase in the next few
months ahead.

It is the duty of the government of the day to provide every Singapore
citizen with a job which pays a decent wage commensurate with the standard
of living in Singapore and not just to give them the "dignity" of having a
job only, to quote the words of PAP MP and NTUC Deputy Secretary-General
Halimah Yacob.

Unless wholesale changes are made to current labor laws to forbid the
recruitment of foreign workers for positions like managers and engineers
which can otherwise by filled by citizens, Singapore companies, including
the GLCs will continue their disciminatory practices of putting up job
advertisements in other countries.